Time for Perks of Work, our weekly recap of intriguing data, surveys, and trends about the 21st century workplace.

Working on climbing the corporate ladder? Do you religiously Slack with work pals about dream benefits packages? Check this space every Friday to keep up with the latest water-cooler talk.

Do work? On a computer?

Cybersecurity firm Gurucul quizzed 476 IT personnel about workplace web use. It turns out some people choose to point-and-click the day away rather than ticking things off their to-do lists.

More than four in 10 (44%) respondents admitted to spending at least an hour a day on websites that aren’t related to work. Over a quarter (28%) copped to spending 2-plus hours exploring the “series of tubes” the late Sen. Ted Stevens (R-Alaska) debriefed us all about in 2006. 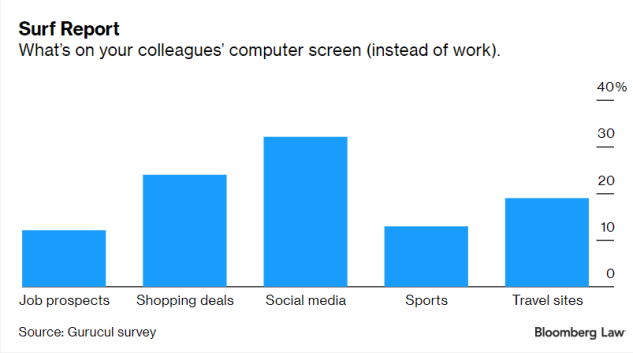 Whether hunting for jobs (12%) or vacation spots (19%), many employees prefer to keep their computer screens clear of any pesky work projects.

The most prominent procrastinators are retail workers. They led the pack (32%) in terms of wandering down internet rabbit holes during work hours.

A Stitch in Time

Wearing a suit and tie to the office used to be the way business was conducted in corporate America.

Some workers now consider it a dealbreaker.

A majority reported lax standards ranging from business casual (26%) to no policy at all (20%). If a media appearance is on the agenda, half of the respondents said they’re good with wearing business attire up top and casual gear from the waist down.

Nearly three in four (75%) conceded ripped jeans are inappropriate from 9 to 5. Over half (56%) said leggings are also out. Over a third of millennials (38%) said management has asked them to dress more professionally.

Meanwhile, a third of respondents (33%) said they’d quit if forced to adhere to a “conservative dress code.”

Getting ahead is a team effort.

And ambitious workers want the boss to get with the game plan.

Corporate profiler Clutch surveyed 510 full-time employees about the retraining and upskilling opportunities they most crave.

Less than half of the respondents (46%) were willing to pursue continuing education outside of work hours. And a majority (57%) favored learning skills via in-person workshops and conferences.

“For businesses, holding retraining during work hours should be as obvious as choosing an office with windows,” Clutch analysts wrote.

Mihir Bagwe | www.databreachtoday.asia » At Peak, the Throughput of the Attack Was Recorded as…

Alicia Hope | Cpomagazine.com » At least 30,000 U.S. organizations are victims of an unusually…