A zero-trust security model has a catchy name, but the methodology means more than not trusting any person or device on the network. What you need to know.

Unless you’ve been living under a rock, chances are you’ve heard about the zero-trust security model. The name is enticing. It implies all devices, resources, systems, data, users and applications are to be treated as untrusted. Cybersecurity professionals don’t want to think of themselves as overly trusting, so zero trust seems like the right way to approach enterprise cybersecurity. But the moniker, while catchy, is somewhat misleading.

The zero-trust security model actually refers to an architecture that features a highly distributed, granular and dynamic trust network. Each one of those terms is important. Let’s see why.

Highly distributed means the model extends trust (or the lack of trust) to every possible user and resource, regardless of where it resides. That includes cloud-based applications and data, as well as remote users and devices. In other words, zero trust fundamentally breaks the perimeter-based security model where devices, applications and users within a firewall are trusted, while those outside the border aren’t.

Finally, highly dynamic means trust levels may be extended or withdrawn as needed, possibly very rapidly. There’s no fixed state. A microservice or container may be trusted one instant, and untrusted the next. 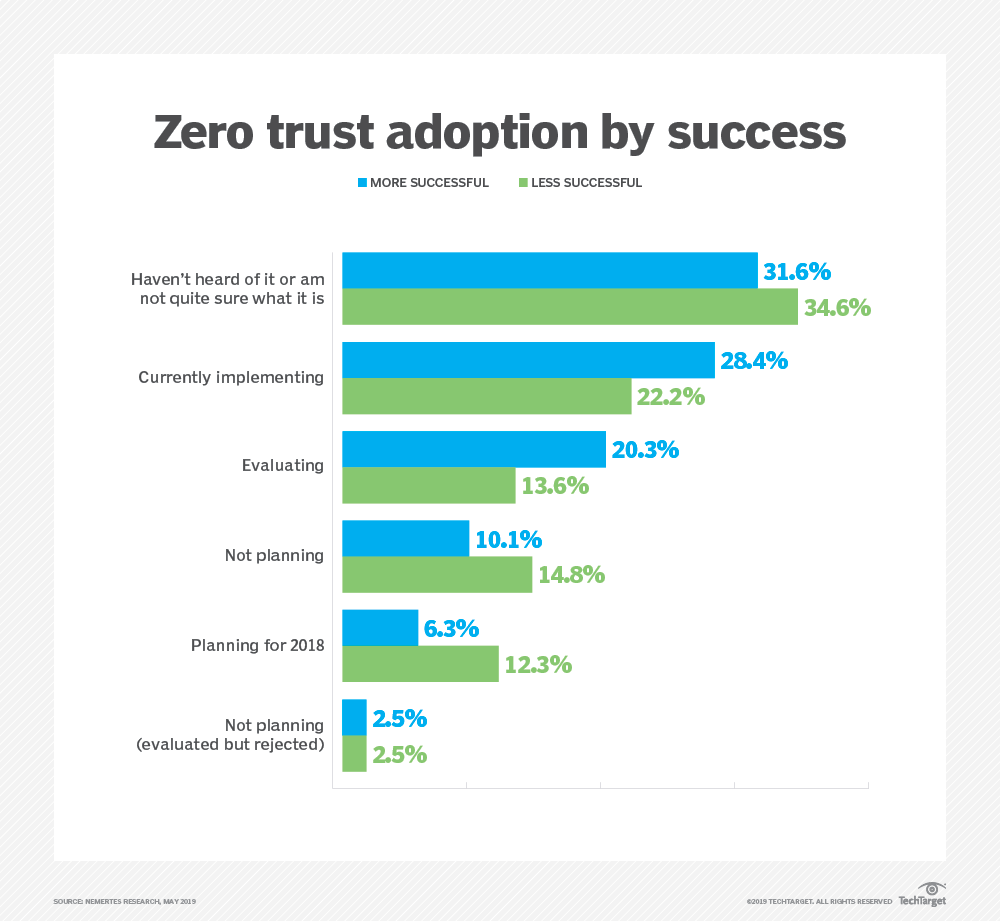 Changing role of the firewall

As the distinction between “trusted inside” and “untrustworthy outside” blurs, the role of the firewall changes significantly. It no longer serves to keep the bad guys out and the good guys in. Instead, the role of the firewall — and the network overall — shifts to green-lighting only those communications transmitted and received in a specific way (as determined by port, protocol and other factors).

We call this deep segmentation, and it is not wed to firewalls or perimeters. Enterprises deploying a zero-trust security model can avoid the chokepoint posed by the traditional firewall-centric security model. Vendors embracing deep segmentation include startups such as 128 Technology; traditional network and security providers such as Palo Alto Networks, Cisco and Juniper are also moving in this direction.

A data-centric, automated approach to security

Zero trust also means taking an enterprise-wide, security-centric approach to data classification, data loss prevention (DLP) and protection, and security automation. As a result, cybersecurity specialists need to be aware of the data that must be protected, to what degree and its location. They also need to automate security-related processes as much as possible.

Not surprisingly, this is exactly what’s happening. Enterprises committed to implementing zero trust are three times more likely than those that aren’t to deploy data classification and twice as likely to deploy DLP and security automation, according to Nemertes research.

Technologies that assist in zero trust

AES software protects endpoints from malware through a variety of mechanisms, such as micro-virtualization, which aren’t based on recognizing malware signatures. The approach goes far beyond traditional anti-malware in that it actually contains and manages applications running in endpoints, and it often applies AI and machine learning to detect misbehavior and attempted incursions.

BTA software integrates feeds from multiple sources (syslogs, analytics platforms such as Splunk and security information and event management) to identify and display anomalous behavior of users, devices and systems based on their actual behavior on the network. Most products use machine learning to set a baseline of ordinary behavior and detect anomalies relative to that. Vendors include Bay Dynamics, Gurucul, Exabeam and Splunk/Caspida.

CASB comprises on-premises or cloud-based software that automatically detects employees’ cloud usage, assesses the associated business and technical risk and enforces policies. In some cases, CASB combines with BTA to deliver anomaly-driven policy implementation. Because cloud migration is a key driver for zero-trust security, CASB must be part of any zero trust implementation. Zero trust adopters are more than twice as likely as non-adopters to have deployed CASB. CASB vendors include BitGlass, Microsoft, Netskope, Skyhigh and Symantec.

To deploy NAC effectively, network and security engineers need a fine-grained security policy and an accurate, up-to-date inventory of assets — each prioritized by security classification. These two components — policy and asset classification — are also critical for zero trust. Vendors that provide NAC include Cisco, Forescout, HPE/Aruba and Trustwave.

In tandem with the move to a zero-trust security model is the trend toward treating everything — including security functions — as code. This means firewalling becomes a function rather than a device, for example. Oversight of that function is more like managing an application rather than a physical component. That, in turn, drives the need for development best practices, especially automation.

One critical question security leaders are contending with in today’s emerging environments is, “how do…

Learning Some Machine Learning While Learning From It

Machine learning is ingrained in our day-to-day life. It is part of our spam filters…